"Everyone has nightmares about the ugliest way to die."

Four young campers, Craig, Peter, Ingrid and Joanie, back-pack through the mountains for a relaxing weekend in the wilderness. While they are out camping in broad daylight, someone starts killing tourists in the woods. Craig warns the others not to go into the woods alone. The hillsides are crawling with fat women huffing up hillsides, nerdy bird-watchers, and young couples. Most of whom meet gruesome ends at the hands of a deranged and growling woodsman with a sharp spike. They enter a forest which becomes denser and darker as they progress. Peter (Nick Mc Clelland) and Ingrid (Mary Galeartz) fear that they are lost. The rest of the terrifying night is spent running and hiding from the maniac murderer (Tom Drury) who is constantly in pursuit. Meanwhile the local sheriff and his deputy decide they should start to investigate some of those disappearances.

Two campers Sharon and Teddy are terrorized in the spooky dark woods of the California wilderness by a cannibalistic knife-wielding madman. Teddy is killed but Sharon manages to escape. Their boyfriends, Steve and Charlie, take refuge in an old cave to protect themselves from the storm. There they meet the killer, an old man wearing a beat up old baseball cap named John. He tells them the story of how he killed his unfaithful wife and her lover. He then gathered his two children and ran off into the forest. Unfortunately, his kids got sick and they commited suicide. Since then, he has developed a taste for human flesh and will kill anybody who trespasses on his territory. Sharon teames up with the ghosts of his two dead children who came back to help stop dear old dads' bad eating habits. Can Sharon save her boyfriend in time and stop the canablism?

NOT SINCE "VILLAGE OF THE DAMNED" HAS DEATH BECOME SO SAVAGE... OR SURVIVAL SO HOPELESS!

This quirky psychological thriller involves a quintet of extremely disturbed, sociopathic kids who stumble into the luxurious winter retreat of a wealthy patriarch (Gene Evans) and his arrogant guests. Little do the vacationers realize that the children are escapees from an asylum for the criminally insane — a fact they realize only after their doom has been sealed.

The Fabulous Journey to the Center of the Earth (1976)

"INCREDIBLE ADVENTURES IN A FANTASTIC WORLD..."

Based on the novel by Jules Verne. Four people try to get to the center of the planet by entering into a world of caves via a volcano. On their way, they discover a lost world that includes prehistoric animals and dinosaurs. This film played theatrically as 'WHERE TIME BEGAN'.

THEY WERE ABDUCTED AND VIOLATED... BUT THE WORST WAS YET TO COME!

Gary Kent plays a psychopath who abducts women and holds them prisoner and an isolated rural farmhouse. His retarded brother Johnny (John Stoglin) forces the captive girls into protracted games of "doctor" while the mens unseen mother barks commands from her attic bedroom. When Kent sets his sights on a shapely coed at a nearby college, the mens unconventional lifestyle unravels leading to a terrifing climax. Called " a sick little number that more than lived up to its exploitive title" by Screem Magazine, Code Red is proud to present this cult classic first time on DVD.

"Schoolgirls is an extremely accomplished quickie with beautiful photography and lighting from Garcia. It has atmosphere and good production values. And it goes beyond the call of duty in being unpleasant." Screem Magazine

Directed by Don Jones (THE FOREST)

Photgraphed by Ronald Victor Garcia (TWIN PEAKS, ONE FROM THE HEART)


SPECIAL FEATURES Specs (not finalized yet)

HE HAD GOOD GRADES... A GOOD GIRL... GOOD BUDDIES... UNTIL THEY PUT HIM THROUGH... THE HAZING.

A college freshman rushes a fraternity and witnesses another pledge's death during a hazing ritual. He and the other fraternity brothers try to cover up the accident and hide the body. 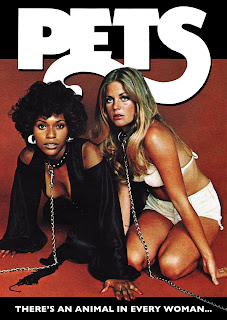